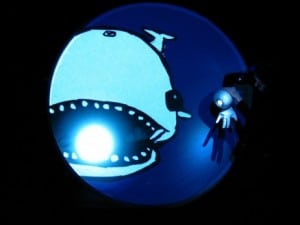 Bring the family to see the internationally acclaimed Adventures of Alvin Sputnik at this year’s PuSh Festival and prepare to be utterly enchanted.

This magical play evokes the enchantment of childhood wonder and the power
of age-old storytelling, creating a world of beauty and wonder.
It’s a revelation and a delight.

The oceans have risen, the land has been swamped, and the survivors look down at the water from the tops of skyscrapers and mountains. In this dazzling multimedia show, we follow the adventures of a man who braves the oceans. As human life lies on the brink of extinction, Alvin Sputnik will embark on a mission into the deep, to save the world and find the soul of his dead wife. >> Find out more about Alvin!

The play takes place at the Waterfront Theatre on Granville Island.
January 21–24
60 minutes (no intermission)

How to get tickets!

Or find out more on the PuSh Festival site.

See a clip from the hit play!

Tim Watts is a puppeteer and animator at the top of his powers. This international sensation is an emotional and imaginative fusion of animation, puppetry, projections, live and recorded music. Children and adults alike will be transfixed; this is an award-winning work of art that crosses boundaries of age.

What people are saying!

“Ingenious and beguiling…this underwater micro-epic has as big a heart as its unlikely hero, and offers a whale of a time in a miniature format.” ~The Guardian

“I highly doubt any $40 million Broadway spectacles could pack such an emotional wallop into two- and-a-half hours as Mr. Watts does into 45 minutes.”  ~BroadwayWorld.com